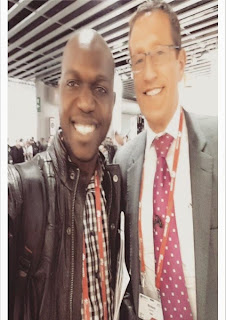 NTV’s motormouth, Larry Madowo, flew to the
Catalan capital of Barcelona to attend the
world’s greatest mobile event;
Mobile World
Congress 2015 and while there, he met one of
world’s greatest reporters and was
overwhelmingly humbled by his presence. Larry Madowo might the ‘man’ in Kenyan context but in the
world, the ntv news anchor still has a long way to go before
he starts receiving standing ovations. When he flew to Spain for the four day summit, most
probably Larry had no idea he would be rubbing shoulders
with one of CNN’s best reporters, Richard Quest. Richard Austin Quest is an English journalist and a CNN
International anchor and reporter based in New York City,
USA. He anchors the eponymous show, Quest Means
Business, on the international television channel. The overly excited Larry couldn’t wait for their meeting with
Quest to lose the taste of time. He rushed to the best place
where he could broadcast details of their meeting with the
CNN reporter for the whole world to know.
READ more  WHO chief slams 'racist' French doctors who want to test Covid-19 vaccines in Africa

Mystery of missing terrorist and house full of explosives in Githurai

Police are trying to find a terror suspect after a house he had been staying alone was found with explosive devices in Nairobi’s Githurai area. Paul Mwangangi had deserted his house since July 2019 when his landlord decided to break in for defaulting to pay his rent. It was then he came across three smoke […]

Media personality Joey Muthengi has given up her Instagram account after it was  hacked. The account which had been verified was on the brink of a million followers, but about three weeks ago, she started losing almost thousand followers a day. The Capital FM presenter is now back on Instagram with a new account joey_muthengi. […]

Online Professional Gaming has taken a new high in Kenya.Safaricom caught cheating to kenyans is another issue. With most brands running online contests on Facebook and Twitter. A select group of individuals has taken this as a route for enriching themselves. And you can’t fault them, You must have seen articles online claiming that […]