Skip to content
You may have seen the s3xxy siren earlier on your TV
screens. Elizabeth Irungu may have quit your screen but 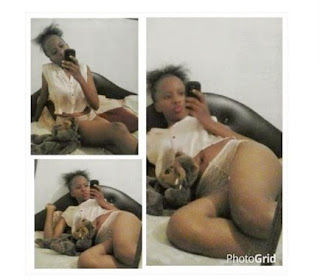 she is that dirty chick who looks into all sorts of
attention. She posted the above photos and the caption
below last night Goodnite friends! oh if u think i’m “over-exposed” in this pic,plz don’t waste
ur 5mb okoa bundles ukinitusi hapa coz me nikona
unlimited wi-fi kwa keja utakuwa unaji-uumiza bure boss!
I can abuse you till morning bila gharama so fanya
hesabu yako poa! Kuwa mjanja! wink emoticon The most
logical thing to do is JUST UNFRIEND or BLOCK ME ndio ata to create room for the 893 pending friend requests
that i have! Thanks! kiss emoticon  mwah! Sweet dreams! #Pic_taken_just_now #TeamMafisi Mkoapi? She needs a mtree whose gonna
give it up to her?
READ more  Kobe Bryant's helicopter pilot was given clearance to fly under worse-than-normal conditions, audio reveals

Looks like SONU chairman, Babu Owino, has brought with him more harm than good in the  past few weeks. Rumour has it that, Paul Ongili a.k.a Babu Owino is responsible for  the recent cases that have seen students in Nairobi university get beaten and even some get stabbed all in the name of the oncoming […]

There have been rumors that Diamond Platnumz was admitted after undergoing a serious surgery that almost cost him his foot. But all this is exaggerated information. It is true that he underwent surgery. But it was a minor one to help get rid of a metal stuck on his foot. Speaking to Soudy Brown(CloudsFM), Diamond […]

Chris Pratt Shows Off His ‘Quarantine Wolverine’ Look — and He Resembles Hugh Jackman!

The Jurassic World actor posted a selfie to his Instagram Story on Monday showing off his longer hair and beard, which he let grow wild within the sort of Wolverine. together with his hair abreast of its ends and his beard protruding , Pratt resembled Hugh Jackman‘s version of the magazine character — intense superhero […]