There was drama in Nyayo Estate, Embakasi last week after Mr. Wanjohi, a Specialist at Information Communication & Technology Management, found a snake in his toilet.

Through an email which he sent legendary Genge rapper, Nonini,  Wanjohi said he found the snake coiled inside the toilet bowl in the morning while going for a short call. 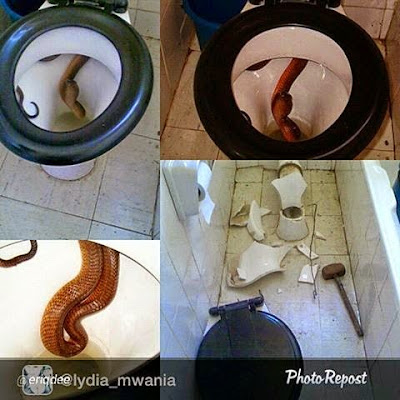 When he tried to call for help, the snake jumped out and coiled itself on the mat, where it was later killed by his neighbors who came to his rescue.

The government has declared Monday, May 25, a public holiday to mark Idd-ul-Fitr. Interior Cabinet Secretary Fred Matiang’i made the announcement through a gazette notice on Wednesday. The day marks the top of the holy month of Ramadhan consistent with the Islamic calendar . Due to the Covid-19 pandemic, the Muslims won’t be ready to […]

TEEN REPUBLIC STAR DOES THE UNTHINKABLE

NTV’s Teen Republic Host Wanjiru Muthoni Displays Her “Flat Buttocks” In Public (PHOTOS)   Days are gone when media identities used to leave a private life and avoiding far from general.aka the teen republic world.  Our neighborhood big names particularly ladies among them media.Moreover Female figures have taken the business by a […]

Deputy President William Ruto has said he has limited contact with President Uhuru Kenyatta in recent times for security reasons. The usually energetic DP has been missing in action from the general public eye since the outbreak of coronavirus within the country. He has been absent in Kenyatta’s press briefings during this era , as […]