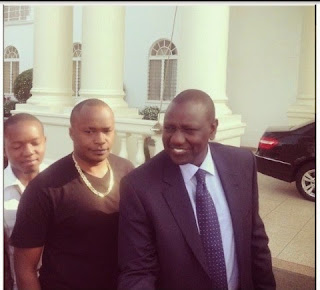 In the wake of murder and assassinations of key politicians in
the country, Deputy President William Ruto is not leaving
anything to chance as far as his security is concerned. On Friday, he instructed his security detail to put together a
mock assassination attempt on his life to see how well they
are prepared to protect him from assassins like those who
murdered Kabete MP George Muchai, his 2 armed bodyguards
and driver in cold blood in the middle of the city
. In the full scale mock drill, a man (an assassin) in camouflage,
tried to shoot at Deputy President William Ruto with a soft
gun near Diamond Park Building and threw the public into
confusion and panic with ‘gunshots’ rendering the air for
almost 10 minutes. However,
Ruto’s security
details were
alert and
successfully
foiled the mock assassination
attempt and
subdued the
‘shooter’ in
minutes. It took
onlookers long
before they
realized it was
just a drill.
Some Kenyans thought the
whole time
that all was not
well because
the drill looked so real. Ruto’s bodyguards proved that, they can protect their boss in
case of a real assassination attempt.
READ more  President Uhuru Kenyatta And First Lady Extends Their Love To Namibia

It can be currently public which past Vice Chief executive Kalonzo Musyokawill be about the ballot gunning regarding Presidency together with or even devoid ofthe actual assist connected with past Prime Minister Raila Odinga. It is immediately after Wiper celebration recommended your ex with the leading seats as well asinstructed Raila to guide your ex […]

John Pombe aka Magufuli will never joke with Uhuruto again

…expelling Kenyans from Tanzania, theGovernment decided to also enforce its laws.“We have been reluctant to our neighboursbecause of the cohesion that has been inexistence until they (Tanzania) decided to kickout our people,” he said.Kello said the decision to apply the law wasagreed upon by various stakeholders inGovernment.However sources said the laws were enforcedafter intelligence officials […]