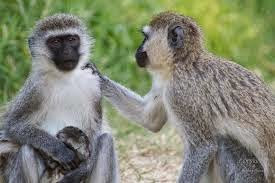 Big Shock! As a Woman in Nyeri is S3XUALLY harrased by MonkeysAs the saying goes,”Monkey sees, monkey does.” Well looks like monkeys in Nyeri are not only just evolving but also adopting the beastiality nature of men. This was the case for woman in Nyeri to whom a group of male monkeys tried to assault her.


While working on the farm, she claimed that a troop of male monkeys tried to quench their conjugal thirst by undressing her.

“I was busy working on my farm as usual when all of a sudden; I heard a commotion from behind and saw a troop of monkeys coming towards me. The males one were holding their privates parts as if to intimidate me,”she said.

“I tried to scare them off but they would not budge. Two of them pounced on me and started undressing me,” she claimed.

The woman’s screams attracted neighbours who came to her rescue.

According to the area assistant chief, David Maina, the stray monkeys from Aberdare National Park have reportedly been sexually harassing women before raiding farms and homes for food.Such cases have been repeatedly reported to KWS, who have in return turned a deaf ear.

What can we say?… Looks like THIRST just got real for the Chimpmunks!

Sudanese-British mobile communications entrepreneur and billionare, Mo – Ibrahim, on Monday embarrassed businessman, Chris Kirubi, after the two met during the unveiling of the 2014 Ibrahim Prize for Leadership in Africa winner. The two, who are known for their philanthropic gestures, exchanged words during the event with Mo telling Kirubi that he does know what […]

Cord leader was this week pictured with a pair of shoes .For a normal person….. READ more  KENYAN BABES WORSE THAN THE UGANDANS(even in foam parties)